Last Saturday the final deck plank on the sailing vessel Ilen was laid at a traditional decking out ceremony, in Hegarty’s Boatyard, Skibbereen. The ceremony, hosted by the Ilen Project, Limerick, marked a significant milestone in a re-build project whose primary goal is to bring Ireland’s sole surviving wooden sailing ship back to Limerick.

The occasion revealed the beauty of the vessel to all those who attended – the high quality materials, the exemplary craftsmanship, and most significantly the marine educational role the vessel can be expected to play when she takes up her operational life on the Shannon Estuary, and beyond, from her new home port of Limerick.

Brother Anthony Keane of Glenstal Abbey, a key promoter of the Ilen Project, officiated at the ceremony and said that what has been achieved so far showed that there was not alone a great work ethic in the Ilen Project but also a spiritual commitment to the work being done.

“This is an amazing achievement to have come so far. It’s an amazing act of faith and commitment, and this boat and the people involved with it rock! It is heading for the sea, like a salmon, of that there is no doubt, even if the Minister for Finance isn’t yet aware of it, but it will go in the water. The faith, energy and skill of Liam Hegarty, John Hegarty, Fachtna O’Sullivan, and their team at Hegarty’s Boatyard are sufficient to tell a tree to be uprooted and launched into the sea, and see it happen. Their work is a phenomenon which outside administrators might better observe and study rather than direct or control.”

“the project underlined what could be done by a determined community, a community that could make their decisions for themselves, not to be dependent upon others beyond their community, but to be self-sufficient, and the project of the Ilen showed that. It also demonstrated that the skills involved, and which were being taught, were skills which younger people could learn, use and remain in their community, without having to leave, and thus strengthen communities. This is a message from the Ilen project.”

Dr Edward Walsh, founding president of the University of Limerick, also spoke, and told of how he had at the outset of the project exhorted all to simply “go ahead and buy the boat” and “pretend” that the money was there, and it was a source of great pride for him to see how it had advanced so far. 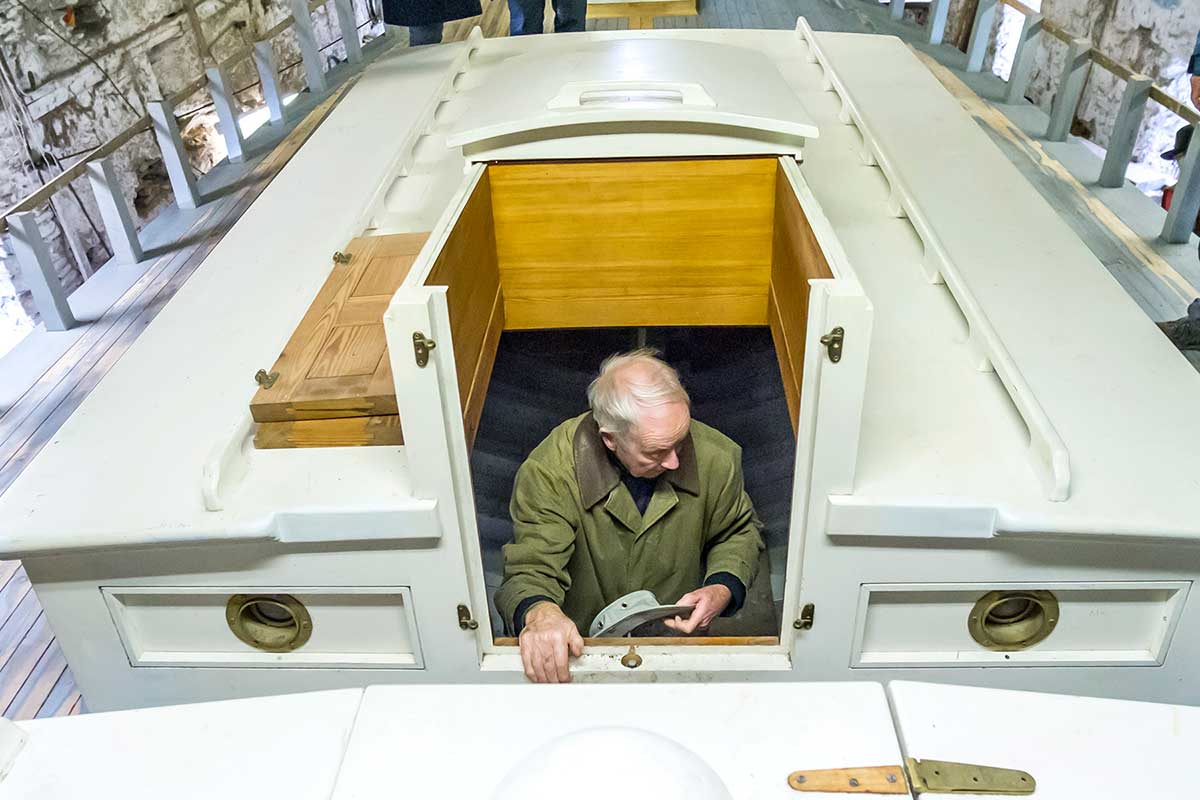 The good ship Ilen has advanced to this moment in time where she happily accepts this final plank. It has been a long journey, an arduous journey, which continues, but one which has reached a plateau, a place and time of wonder and of thanks.

In 1926 the Ilen, Ireland’s sole surviving wooden sailing ship, sailed from Limerick to an active 70 year working life in the South Atlantic, and the completion last Saturday of her new weather deck brings her return a lot closer.

Saturday’s decking-out ceremony afforded all those who attended the unique opportunity to view the classic lines of the vessel, feel the reel of the heaving keel, admire her sheer, walk the new old growth Douglas Fir deck, or stand below deck amid her massive Irish oak frames – a tactile experiences unique to big wooden sailing ships.

And so Sinead Hegarty and Mary Jordan, Baltimore, hammered home the final deck plank with blows swift sweet and true. The ship seemed imperceptibly to roll a little, looking forward to her sea trials.

More photographs from the decking-out ceremony can be seen here >

Background information on this significant ship is available here >